I don't know how to even start sharing how thankful I am for this book. 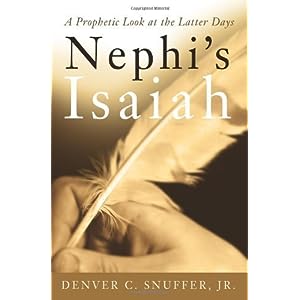 A little over a year ago I began reading Denver Snuffer's works.  I was a bit hesitant to begin The Second Comforter: Conversing with the Lord through the Veil, due to the implications on the cover and the title.  I was hesitant to explore books that weren't "Deseret Book" approved.  A trusted friend recommended it, however, and due to consistent reading of these books, my entire concept of the gospel feels 180 degrees changed, improved, and enlightened.  I am so thankful to God for the books coming out of the keys at Denver Snuffer's computer.  They are truly inspired.

Nephi's Isaiah is a companion to The Second Comforter, and leads the reader to an enhanced study of the The Book of Mormon.  I always wondered why Nephi took up such great space in The Book of Mormon to cite Isaiah, especially if he knew that we would already have Isaiah's words to read from the Bible.  This book presents a "why", and also a new way to read it.

There are so many ideas presented in this book that I could likely take a paragraph and blog about it for a week.  If I could quote a few of them, I would, but the book is copyrighted, with no permissions given for quoting, so I avoid doing so... especially since the author is a lawyer. :)

I have never been very much inclined to read nonfiction gospel study works.  I get bored quickly, and often don't enjoy the simplicity of some of the books, or the odd focuses on the author.  This piece does none of that.  It's not senseless writing, or intended to give the reader excuses on why they can ease up on strict commandments.  It's bold, just like Nephi.  It's clarifying, and makes words and customs easier to understand, and quite frankly, answers so many of the "whys" which I've been looking for answers for for years.

One point I really enjoyed near the ending is how it is pointed out that Nephi did not have a broad audience to preach to.  He likely felt small, or incidental among his people, even though he was their leader.  He saw our day, but it is clear that he leads more people now than he ever did in mortality.  I find the idea fascinating.

And as expected from this author, he never takes credit, but acknowledges that anything useful is from God and Nephi, and says that anything useless is his fault.  Always makes me laugh a little.  If we could all be so humble.

What are your thoughts?  Have you tried any of Snuffer's books?  Would you try one?  Please share if this review has helped you in some way.  Thanks!
Posted by jenheadjen at 6:54 PM