186 years ago on September 21, 1827 the plates that would become the Book of Mormon were released from the vault in which they stood, to be translated and scrutinized the world over.  An amazing book it is.  Yesterday marks a very eventful day indeed.  I wonder if anyone else noticed.

It was also a full moon.

Fall equinox, 190/186 year anniversary, and full moon.  Stars are probably aligning, but I know too little about them to make any comments.  Hope someone else does. :) 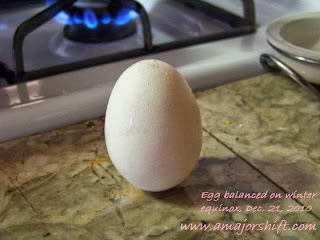 Fun fact: you can balance eggs on end relatively easily on the quarterly equinox.  This one was done at my home in Utah, back on December 21, 2010.  Pretty fun to give a round.

This is for you and everyone.

"And now, Daniel, remember, remember that it is upon the rock of our Redeemer, who is Christ, the Son of God, that you must build your foundation that when the devil shall send forth his mighty winds, yea, his shafts in the whirlwind, yea when all his hail and his mighty storm shall beat upon you, it shall have no power over you to drag you down to the gulf of misery and endless wo, because of the rock upon which you are built, which is a sure foundation, a foundation whereon if men build they cannot fall." (Helaman 5:12, adapted to your name)


This morning I was led to read Helaman 5:10.  It turns out my friend (who doesn't really know me, but I'd like to consider him my friend) got spanked and excommunicated by the church.  Amazingly, he seems to feel no hostility or resentment toward anyone involved.  I am amazed by his pure love of Christ.

And remember also the words which Amulek spake unto Zeezrom (these are pretty awesome words, and I do remember them) in the city of Ammonihah (which had since become destroyed, as he and Alma warned/prophecied); for he said unto him that the Lord surely should come to redeem his people, but that he should not come to redeem them in their sins, but to redeem them from their sins.

Big difference noted.  The Lord will not come to redeem us in our sins, but from our sins.  What, exactly, does that mean?  The next verse tells us that the difference is repentance.  And I learned from Denver and my other friend Daniel that repent means "to turn" to God.  Denver wrote that to repent in Greek means "to come home".  I really love that, much better than the Latin translation, "to feel sorrow" or "to feel pain".  Interesting, indeed, that we choose the negative connotation.  God would have us return home, wouldn't he?

You know what it's like to be emotionally invested, don't you?  You're so young, but you love a game for Pappy and WaWa's iPad, called Minecraft.  You love to play when  you wake up, when you're in the car, in church, wherever.  I almost have to pick a fight to get you off of it.  We could say that you're addicted, but I also think there's an emotional investment.  You really like playing it, building things on it, and creating.

I'd have to say that mommy's emotionally invested too.  I've been learning so many wonderful new things the last few years that it's changed me.  People might wonder if I'm still "on track" on where I should be, but I have to wonder where that "track" was leading me.  Quite frankly, it was a track of stagnation, although I really didn't have a clue as to how stagnant I had become.  I have been inspired to reach into the mysteries that Alma teaches us to to dig into.

9 And now Alma began to expound these things unto him, saying: It is given unto many to know the mysteries of God; nevertheless they are laid under a strict command that they shall not impart only according to the portion of his word which he doth grant unto the children of men, according to the heed and diligence which they give unto him.
10 And therefore, he that will harden his heart, the same receiveth the lesser portion of the word; and he that will not harden his heart, to him is given the greater portion of the word, until it is given unto him to know the mysteries of God until he know them in full.
11 And they that will harden their hearts, to them is given the lesser portion of the word until they know nothing concerning his mysteries; and then they are taken captive by the devil, and led by his will down to destruction. Now this is what is meant by the chains of hell.  (Alma 12:9-11)

I was led to explore mysteries.  I'm not sure why God saw fit to inspire me in this direction, but I seemed to be instilled with a curiosity on things that were considered "mysterious", and began to actually find answers.  One of the sources was Denver Snuffer's books.

Every time I would explore downloading some of the writings of Parley P. Pratt from Amazon, they would recommend this one book by Denver Snuffer.  I found it curious that he used a line we hear in the temple on the cover.  Did that mean he exposed things that shouldn't be exposed?  I was very hesitant.  But when a soon-to-be dear friend said that he had read it, and highly recommended it, I trusted it was safe to explore.

It's been about 2 years since I discovered The Second Comforter: Conversing with the Lord through the Veil.  It took me 2 months to read it, which is slower than I've read and finished most other books I had been reading at the time.  (I would peel through LDS romance novels every two-three days or so, so this was a drastic change for me at that time in my life.)  I share it with most of my friends.  It changed my life; how?

It inspired me by asking questions.  Why this?  Why that?  Why do I do what I do?  Do I do what I do because it's supposed to be that way?  Am I truly doing things the way God wants them done, or the way man requires?  Why do certain things not make sense in the scriptures?

For the first time ever, some things began to make sense, not because the words were changed, but because my rosey glass were unfogged a little, and I can see more clearly.  And even though we walk in the smog of this world, things are getting clearer.

This morning I read something from one of Denver's more recent books, Remembering the Covenant, Vol. 2.  This can also be found online, but I bought the book so I could underline things I liked more readily.


Having the Gospel understood is the first step, of course. As a group, there is such a poor command of the scriptures that we have some considerable study before us. Passing familiarity with some scriptures is not of much use. They are the standard given to us to help reveal the basis for becoming a covenant people.  (source here)

Ouch!  Did we just get spanked?  I think we've gotten spanked in the scriptures too (D.&C. 84), when the Lord places a condemnation on us for not using the Book of Mormon like we ought.  (We treat it "lightly".)  But we got another one from Ezra Taft Benson back in the 80's, and I'm really not convinced we've changed much since then.  Do we study our scriptures any more than we did then?  How about in Church?  We're not even supposed to crack our scriptures in sacrament meeting anymore.  Wha-what???

So I've been moved by his words - meaning Denver's reiteration of the Lord's in scripture.  They've moved me to improve my studies, my searching, my studying.  I have found a ridiculous wealth of information that the LDS Church has published for our behalf, whether it be through BYU, the Joseph Smith Papers websites, or other sites.  Finding this wealth that goes completely unnoticed in preference for articles written by the "Church Magazines Department" just astounds me.  I've come to learn, Austin, that I am at the point of relying on outside studies for my growth, if I don't want to stagnate.  And if I stagnate, I harden.  And if I harden, I am led captive by the devil.  Hail no!

That said, I am not afraid of reading things online.  My faith is firm such that I'm not bothered to be troubled by people nit pick over the veracity of the Book of Mormon.  I already know it's true, so I'm more inclined to feel sad that they're bible bashing over the possibility of more scripture.  I'd rather dig into varying thoughts among those who also believe it to be true, and there are so many possibilities!

The last paragraph I read this morning in Remembering the Covenant, Vol. 2 really moved me as well.  Here 'tis:

Lest some take this the wrong way, let me warn that if this offends, it is indicative of being led captive by the devil.  The Lord does not command us to follow a man, despite primary songs that tell us to.  The Lord tells us to "come follow me"; it is not "come follow a man who follows me, and then you are guaranteed to never be led astray".  This sounds an awful lot like another plan, which allows for control, dominion, and chains.  God will stretch us.  He will lead us sometimes in ways, like Abraham, that we might think are not always what is expected.  But take confidence that when you know you are being taught of God, you are being taught of God.

Two days ago Brother Snuffer experienced a disciplinary council, which is the MOST BIZARRE THOUGHT to me.  Continuously in his books, he stresses the need to continue forth in this church, despite the evidence that we have been led to various traditions that might not be the Lord's way.  He tells us that we are to come to God, face to face, and we are to continue in this work.  He makes no profit from his books; they all get donated to various funds, some of which are the Church's.

I find myself strangely emotionally invested.

Which leads me to the next trail of thoughts:

Is the canon closed?
Does God only allow men in positions of leadership to speak on His behalf?
If John the Beloved appeared to you, would you be allowed to share such an experience?
Would you believe someone if they told you he had appeared to him?
Is it possible that Denver has invited people closer to Christ than they have otherwise been?

I haven't read  Passing the Heavenly Gift yet, which is the book which has apparently led to the disciplinary council.  I have it on my bookshelf, in line to be read after Remembering the Covenant, Vol. 3.  I might just skip that one so I can see what all the hubbub's about.  But I have found nothing thus far which would lead me to think he has need to be excommunicated.  On the contrary, I see some of the heathenous things that come out of our mouths, and wonder at the irony of the whole situation.  It is ridiculous.

Whatever happens, he needs no defense, and this is not my effort to defend.  But I find myself strangely, ridiculously, emotionally invested in him, his family, and whatever comes of this.  I am ridiculously grateful to have been pulled to stumble across the books which have come from his "desk".

Somehow it feels like a stoning.  We ought to take care with paying attention to our reactions.

Read these books sweetheart.  You will be enlightened if you read with an open heart.