In 3 Nephi 12, Christ discusses that he had chosen 12 disciples.  I always wondered why they are called disciples, instead of apostles.  Verse 1 describes that they are called, given POWER and authority to baptize.  Christ tells the multitude that they are Blessed IF they give heed to the words of THESE twelve, which were chosen from among them to minister and to be their servants.  He expresses that he has given them POWER to baptize with water, and after that HE will baptize them with fire and with the Holy Ghost.  And they are Blessed if they will believe in him and be baptized.

A few days ago I began studying a lesson for my Primary class on the Sacrament.  It directed me to 3 Nephi 18: 1-11.  I read it, and was led well beyond verse 11.  Baptism and the sacrament tie in so beautifully together, but I think we have a lot of misconceptions and misunderstandings and FALSE TRADITIONS regarding them.  I don't even know how much some of the false traditions matter, but a false tradition is something that damned the Lamanites (damned meaning their progression was stopped).  These false traditions were things that were taught to them, and they simply believed because it was much like tradition.  Much like how Mormons celebrate Halloween and Christmas and Easter, which in reality are defunct pagan holidays.  (Why do Mormons celebrate Halloween again?  Because we believe in witches, evil ghosts and spells?  We've got some great trunk or treat pics I'm sure we all have on our cameras.  My nephew who is going on a mission soon won 1st prize in ours this week for his great rendition of a pirate ship on the back of his SUV.  I was happy for him when he won.  It was fun.  But also not exactly something I would imagine Christ's 12 disciples participating in if they were to make an impromptu appearance.  No offense!)  Anyways...

The Lamanites were damned due to their traditions.  But when they let go of their traditions, we have stories of King Lamoni and the marvelous transformations that happened when they simply gave up everything to know the God Ammon spoke of.  (Forgive me if I'm mixing up names.  Just going from memory.)  What are our traditions which keep us from knowing Christ?

Back to verse 1.  These twelve disciples were given power to baptize.  Why only 12?  What's the significance of 12?  The symbolism?

And down the road, three of these 12 request to tarry on the earth.  That's 1/4.  Why 1/4?  They certainly still have power to baptize.  And they roam the earth.  Where are they?  And why do we not plea to heaven for them to baptize us?

God can bestow his power on whomever he feels to.  Today is October 31st, the day that some believe the "realms" are more open than others.  I don't remember the tradition or explanation why.  But it's no wonder people have unexplainable things happen on this day, if that is the case.  And it's no wonder it is chosen by witches and werewolves to howl at the moon.  I wonder what would happen if all God-fearing people, particularly those who believe in the "3 Nephites" would supplicate their Father to allow them to make their presence known, offer baptism to those seeking it, and grow closer to returning Zion.

THAT would be something to celebrate!
Posted by jenheadjen at 10:37 AM 2 comments: Links to this post

We played checkers this afternoon. 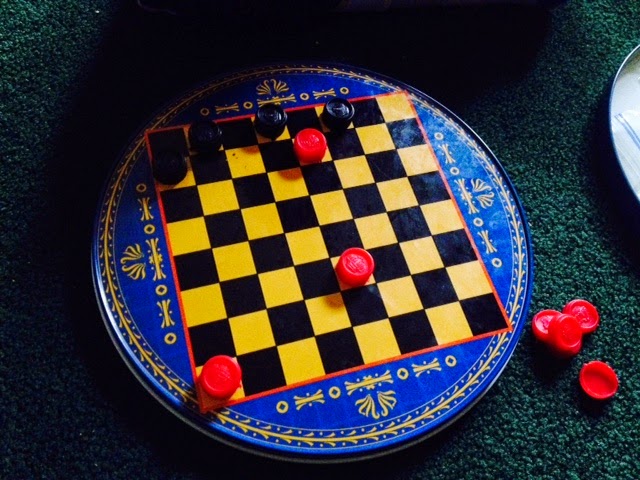 As we played, I was black and you were red.  I advanced across the board, and upon reaching the other side, we would both say, "King me!"

It occurred to me that this could definitely serve as a parable.

If we do not advance across the board, there is no possibility of declaring, "King me!"  And what fun is checkers if no one ever gets to be a king?  We must advance or there is no purpose to playing.

~Mom<3
Posted by jenheadjen at 10:59 PM No comments: Links to this post