What do you think, Jesus?

If you told me a year ago that the Church does opinion polls to gather the insights of its members, I'd have probably been skeptical.  I read about it in various blogs, but just didn't pay much attention.  However in the last 11 months, I've received 6 invitations to complete an opinion poll for the Church.  I have completed every one I've been asked to complete.  The topics have ranged from gay marriage to youth issues (I'm not supposed to discuss them with other members, like you people reading this) to other procedural things which I don't really recall.  At first I felt obliged to provide the info, but I noticed afterwards that I indeed felt quite slimy.  Why?

Well probably because I felt like I'm contributing to a Wizard of Oz scenario.  We believe in modern prophets, modern revelation.  If we believe in these, then why would there ever be a need to opinion poll, ANYONE? 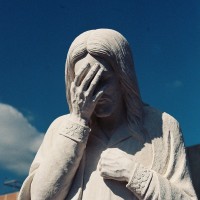 When I presented the fact that I've received 6 invites in less than a year to my husband, he said, "You know it costs a lot of money to have polls done, right?  Like Scott Rasmussen and Zogby are making bocu bucks.  Like millions...  You've gotta pay someone to come up with the questions, to send out the letters, to gather and collect the data... yeah, it's not cheap.  They're probably having focus groups and such.  At the end of the day who cares?  If you're trying to get the pulse of the Church members... why do you need to poll them?  Did King Benjamin have focus groups and pollsters going around?"

I don't know what cost this comes to the Church at.  Probably much less, I would think, seeing that it's an in-house operation.  And to be honest, this post isn't about nit-picking at money.  But it is about bringing to light the fact that this is going on, and if you know me, you know I'm anything but a liar.  And I just got my 6th survey request.

I'm not supposed to say what the topic for this one was about, but I will say that I let them know I don't see the need for opinion polling if we are a church built upon living revelation.  Are we not?  If God is directing the Church, which "god" are we serving by asking mortals what they think about every jot and tittle, and then shifting policy, procedure, or in this case, resources to match the trending beliefs?  Shouldn't we be more concerned about asking Jesus what He thinks?
Posted by jenheadjen at 11:20 PM