Pride and a Chocolate Pool

A few days ago I broke my Facebook hiatus.  I had someone sign up for my business services, and part of my service for them includes adding them to a private Facebook group.  So I broke my hiatus in order to add them to the group, and in the process, felt good about sticking around for awhile.

In doing so, I noticed that the same things that led me to get off of Facebook were still there.  Here are about 15 of favorite and least favorite.

Needless to say, I got back off about as quickly as I got on.  Maybe I'll be back, but I found I was just as addicted as I was before I got off in July, despite the ever-so-pleasant observations.  When I look at the time I spent with my kids, I don't regret it for a minute.  Did I miss anything of import?  Is it all just gossip?  Was my life improved?  Did my friendships develop any better with the people entrenched in it?  Most didn't really even realize I was gone.

It surprised me that the relationships that developed the most were with these people who chose to keep up outside of Facebook.  Texts, calls, and visits increased in quantity and quality.  And in returning to Facebook, even for a day, I observed that even the people I previously felt most drawn to were some of the least likely to have any personal communication with me.  The relationships I imagined were there, in all actuality, weren't.  And aren't.  Not that it's their fault or anything.  It takes two to tango, you know?

In studying the frequency of the words "heart" and "hardness" in the Book of Mormon, I am convinced that Facebook is a place for the hardening of hearts.  It is a distraction, where people like me often forget that there are other people behind their monitors with real hearts and feelings.  There is little effort in self-censorship.  There is little true caring or buoying.  It's a 24-7 war of words, self promotion, and self flattery, even if we think we're putting good stuff out there.  Finding a fitting quote on pride was easy:


I believe pride and self-promoting found on Facebook are a sign of our times, almost more so than homosexuality.  Take a break and look at how real your Facebook "relationships" are.  Compare it to how much time you spend on it, and divide it by 7. Times your answer by 43 and you'll get how many steps it takes to get to heaven.  Just kidding.

Doesn't this post sound hard hearted?  That's how I felt by the time I got off.

We have a pool in the backyard.  I've taken pictures over the years we've had it.  Sometimes it's blue, like when we clean it out. 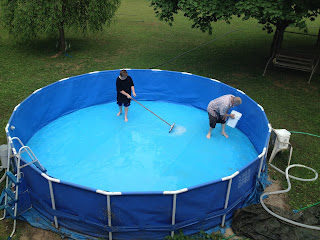 Sometimes it's green, which is quite frequently, because we can't seem to keep the ph balanced. 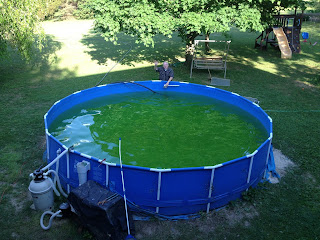 And then today, for the first time ever, after re-filling it this weekend, and my dad adding chemicals last night to shock it, it turned green again.  And then I looked a few hours later, and it looked like this. 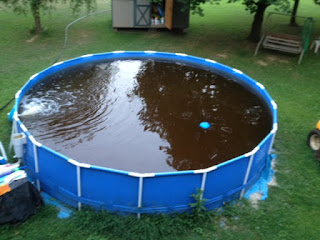 Coffee!  Chocolate?  Never in my life have I seen a pool this brown.  Never.  I'm sure it's just a chemical reaction.  But worth sharing, for what it's worth.  It took me at least 10 hours to consider that it might be a sign or symbol of some sort.  It will take at least 10 times cleaning the filter before we have any hopes of it becoming clear.  Or we could just drain it and start over, again.