Last night I was given pure knowledge in a dream.  The insight had little to do with the context of the dream, and it's kind of funny that it was slipped in at the end, just before I awoke, so I could remember it and then forget the bulk of the dream.  But the revealing of understanding was important.

Understanding was given.  God is LOVE.  Not just mushy love but God is filled with the vibration of love, which is also joy.  But this came after the dream.

In the dream I was instructed that God is HOTTER than the sun.  He is BRIGHTER than the sun.  When Jesus the Christ returns to earth in glory, HE WILL BE HOTTER AND BRIGHTER THAN THE SUN.  Should the sun come down and touch the earth, it would be so hot that all things would burn as stubble.  We should also be inclined to "hide our faces from Him" as it were, because HE IS HOT.  This is because of His INFINITE amount of LOVE.  His frequency, His energy (heat), His joy is more intense than the sun.

This is why our bodies must be changed to withstand His presence, as well as why He needs to "cloak" or "conceal" Himself so that He can come to earth and show Himself to us.  We truly would not be able to withstand the heat of His presence, UNLESS we are transfigured with a limitless amount of LOVE as well.

This is why Moses was transfigured when he rose upon the mount, because otherwise he would have burned in YHWH's presence.  Not because YHWH wanted to cause any harm, but by nature He is that MUCH LOVE.

When people shirk at the idea of love, that it's not sufficient to cure the world, they have no idea that they are in the abyss of sin of hate, malice, unbelief, false tradition, and ire.  They will not be able to withstand Christ's presence not due to Christ's choices, but because of their UNWILLINGness to increase in LOVE.  Perhaps they are unwilling to forgive, and choose to hold on to old wounds.  Let Christ heal them.  BEG Him to.  Let Him cleanse you in love, and let go of your desire and need to be right on every thing.  When you are purified, you increase in love.  When you are sanctified, your love increases.  When you forgive, it increases again.

Not that which goeth into a man defileth him, but that which goeth out.  If when placed under pressure or stress you express anything but love, you are not pure yet.  Beg! Him to purify you, and do not delay or be fearful of the consequences.  Whatever hardship we endure by the begging will prove worthwhile in the lack of darkness, should we press forward.

Know the Lord NOW.  I'm no better than anyone else, and share because it was made known to me to share - with intense urgency.

As a beautiful reminder, when I walked out the door to take my son to the bus after receiving this message, the sky looked like a love sky.  Pink horizons all around, despite being not the same direction as the sun. 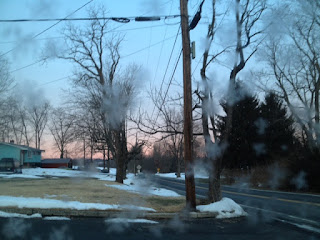 It was as though the earth were confirming the message.  It would withstand the heat because it too, is filled with LOVE.  It appeared to be glowing pink, if but for a few minutes as the sun arose.

1 Verily, thus saith the Lord: It shall come to pass that every soul who forsaketh his sins and cometh unto me, and calleth on my name, and obeyeth my voice, and keepeth my commandments, shall see my face and knowthat I am;
2 And that I am the true light that lighteth every man that cometh into the world;
3 And that I am in the Father, and the Father in me, and the Father and I are one—
4 The Father because he gave me of his fulness, and the Son because I was in the world and made flesh mytabernacle, and dwelt among the sons of men.
5 I was in the world and received of my Father, and theworks of him were plainly manifest.
6 And John saw and bore record of the fulness of myglory, and the fulness of John’s record is hereafter to be revealed.

7 And he bore record, saying: I saw his glory, that he was in the beginning, before the world was;
8 Therefore, in the beginning the Word was, for he was the Word, even the messenger of salvation—
9 The light and the Redeemer of the world; the Spirit of truth, who came into the world, because the world was made by him, and in him was the life of men and the light of men.
10 The worlds were made by him; men were made by him; all things were made by him, and through him, and of him.
11 And I, John, bear record that I beheld his glory, as the glory of the Only Begotten of the Father, full of grace and truth, even the Spirit of truth, which came and dwelt in the flesh, and dwelt among us.
12 And I, John, saw that he received not of the fulness at the first, but received grace for grace;
13 And he received not of the fulness at first, but continued from grace to grace, until he received a fulness;
14 And thus he was called the Son of God, because he received not of the fulness at the first.
15 And I, John, bear record, and lo, the heavens were opened, and the Holy Ghost descended upon him in the form of a dove, and sat upon him, and there came a voice out of heaven saying: This is my beloved Son.
16 And I, John, bear record that he received a fulness of the glory of the Father;
17 And he received all power, both in heaven and on earth, and the glory of the Father was with him, for he dwelt in him.
18 And it shall come to pass, that if you are faithful you shall receive the fulness of the record of John.
19 I give unto you these sayings that you may understand and know how to worship, and know what you worship, that you may come unto the Father in my name, and in due time receive of his fulness.

21 And now, verily I say unto you, I was in the beginningwith the Father, and am the Firstborn;
22 And all those who are begotten through me arepartakers of the glory of the same, and are the church of the Firstborn.
23 Ye were also in the beginning with the Father; that which is Spirit, even the Spirit of truth;
24 And truth is knowledge of things as they are, and as they were, and as they are to come;
25 And whatsoever is more or less than this is the spirit of that wicked one who was a liar from the beginning.
26 The Spirit of truth is of God. I am the Spirit of truth, and John bore record of me, saying: He received a fulness of truth, yea, even of all truth;
27 And no man receiveth a fulness unless he keepeth his commandments.
28 He that keepeth his commandments receiveth truthand light, until he is glorified in truth and knoweth all things.
29 Man was also in the beginning with God. Intelligence, or the light of truth, was not created or made, neither indeed can be.
30 All truth is independent in that sphere in which God has placed it, to act for itself, as all intelligence also; otherwise there is no existence.
31 Behold, here is the agency of man, and here is the condemnation of man; because that which was from the beginning is plainly manifest unto them, and they receive not the light.
32 And every man whose spirit receiveth not the light is under condemnation.
33 For man is spirit. The elements are eternal, and spiritand element, inseparably connected, receive a fulness of joy;
34 And when separated, man cannot receive a fulness of joy.
35 The elements are the tabernacle of God; yea, man is the tabernacle of God, even temples; and whatsoever temple isdefiled, God shall destroy that temple.
36 The glory of God is intelligence, or, in other words,light and truth.


37 Light and truth forsake that evil one.
38 Every spirit of man was innocent in the beginning; and God having redeemed man from the fall, men became again, in their infant state, innocent before God.
39 And that wicked one cometh and taketh away light and truth, through disobedience, from the children of men, and because of the tradition of their fathers.
40 But I have commanded you to bring up your childrenin light and truth.
41 But verily I say unto you, my servant Frederick G. Williams, you have continued under this condemnation;
42 You have not taught your children light and truth, according to the commandments; and that wicked one hath power, as yet, over you, and this is the cause of youraffliction.
43 And now a commandment I give unto you—if you will be delivered you shall set in order your own house, for there are many things that are not right in your house.
44 Verily, I say unto my servant Sidney Rigdon, that in some things he hath not kept the commandments concerning his children; therefore, first set in order thy house.
45 Verily, I say unto my servant Joseph Smith, Jun., or in other words, I will call you friends, for you are my friends, and ye shall have an inheritance with me—
46 I called you servants for the world’s sake, and ye are their servants for my sake—
47 And now, verily I say unto Joseph Smith, Jun.—You have not kept the commandments, and must needs standrebuked before the Lord;
48 Your family must needs repent and forsake some things, and give more earnest heed unto your sayings, or be removed out of their place.
49 What I say unto one I say unto all; pray always lest that wicked one have power in you, and remove you out of your place.
50 My servant Newel K. Whitney also, a bishop of my church, hath need to be chastened, and set in order his family, and see that they are more diligent and concerned at home, and pray always, or they shall be removed out of their place.
51 Now, I say unto you, my friends, let my servant Sidney Rigdon go on his journey, and make haste, and also proclaim the acceptable year of the Lord, and the gospel of salvation, as I shall give him utterance; and by your prayer of faith with one consent I will uphold him.
52 And let my servants Joseph Smith, Jun., and Frederick G. Williams make haste also, and it shall be given them even according to the prayer of faith; and inasmuch as you keep my sayings you shall not be confounded in this world, nor in the world to come.
53 And, verily I say unto you, that it is my will that you should hasten to translate my scriptures, and to obtain aknowledge of history, and of countries, and of kingdoms, of laws of God and man, and all this for the salvation of Zion. Amen.

Posted by jenheadjen at 8:53 AM