Revolting at that which is of God

I found this thought to be impressionable.  From The Words of Joseph Smith, (p..60) as recorded by William Clayton in his private book on 5 January, 1841:


"The first step in the salvation of men is the laws of eternal and self-existent principles.  Spirits are eternal.  At the first organization in heaven we were all present and saw the Savior chosen and appointed, and the plan of salvation made and we sanctioned it.  We came to this earth that we might have a body and present it pure before God in the Celestial Kingdom.  The great principle of happiness consists in having a body.  The Devil has no body, and herein is his punishment.  He is pleased when he can obtain the tabernacle of man and when cast out by the Savior he asked to go into the herd of swine showing that he would prefer a swines body to having none.  All beings who have bodies have power over those who have not.  The devil has no power over us only as we permit him; the moment we revolt at anything which comes from God the Devil takes power.

This earth will be rolled back into the presence of God and crowned with Celestial Glory."

[Copied as in original.]

I greatly enjoyed the quote regarding our revolt.  When we revolt at anything, be it scripture, correct principles, or any other form of truth which comes from God, the devil gains power.  Does that mean he has complete control?  No.  But perhaps he gains or increases in power when we choose to decline the light of truth, essentially saying, "No thank you, that pushes my belief system too much so I'm going to decline anything you have to say."  Do I believe that?  I can see it evident in those around me.  When I observe that they prefer to observe their traditions and beliefs over what scripture plainly dictates, it gives me pause.  When I find myself accused of being out of the way because I prefer the words in scripture to our "beliefs", these thoughts from Joseph remind me that perhaps the tables are turned.  I hope to memorize this one.  It ties in (but also contradicts, if one is not careful to understand) with this thought:

“If any man writes to you, or preaches to you, doctrines contrary to the Bible, the Book of Mormon, or the Book of Doctrine & Covenants, set him down as an imposter... Try them by the principles contained in the acknowledged word of God; if they preach, or teach, or practice contrary to that, disfellowship them; cut them off from among you as useless and dangerous branches.” - April 1, 1844 Times and Seasons (Thank you, Michael Hamill, for a recent reference to this.)

I don't know if this was revelatory or opinion from Joseph on how to handle these types of disagreements.  The principle is there, however, on how dramatic the idea is of holding to the word of God.  It would be a branch or a thought inching toward apostasy, to teach things which are contrary and opposed to the word of God.  What if we did set down men that impose their traditions or false interpretations onto scripture?  Indeed, they would be in the act of imposting.  This is such a tricky concept, because I have seen people reject ideas that have been from God which perhaps are not well-known or easily found in scripture, and set down a true message because they don't know where the concept is found in scripture.  Likewise I have seen people set down the truth contained in scripture because it was not one of their favorite verses, or something that came down from a given church's headquarters as their doctrine, so they disregard it.  In either case it is imperative that we understand how to detect truth.  (I really enjoyed stumbling across this explanation on how to interpret the Spirit, which is how we often claim to recognize truth.)

"This earth will be rolled back into the presence of God and crowned with Celestial Glory."

I find the part about the earth being "rolled back" to be quite fascinating too.  Joseph also makes a distinction between the words 'world' and 'earth'.

"The world and earth are not synonymous terms.  The world is the human family.  This earth was organized or formed out of other planets which were broke up and remodelled [sic] and made into the one on which we live.  The elements are eternal.  That which has a begining [sic] will surely have an end.  Take a ring, it is without beginning or end; cut it for a beginning place, and at the same time you will have an ending place." (WOJS p. 60, 5 Jan 1841, extracts from William Clayton's Private Book)

The imagery that comes to mind is that we are on a giant sliding board, where perhaps God is at the top, and we are at the bottom of the slide in our fallen state.  Another image that it reminds me of is those birthday noisemakers. 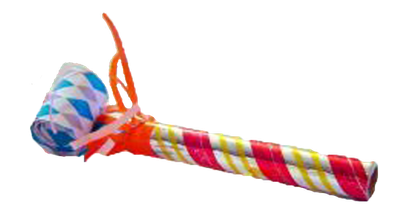 When you blow air into them, they extend, but when the air is released, it rolls back.  I wonder if the thought has any merit.

Reading The Words of Joseph Smith has expanded my understanding and contemplation to consider things I never considered before.  I hope it serves as a launch pad for greater revelation and understanding, as we are all intended to learn and know the fullness of God's dealings, power, and the Truth of His Love.
Posted by jenheadjen at 9:53 AM